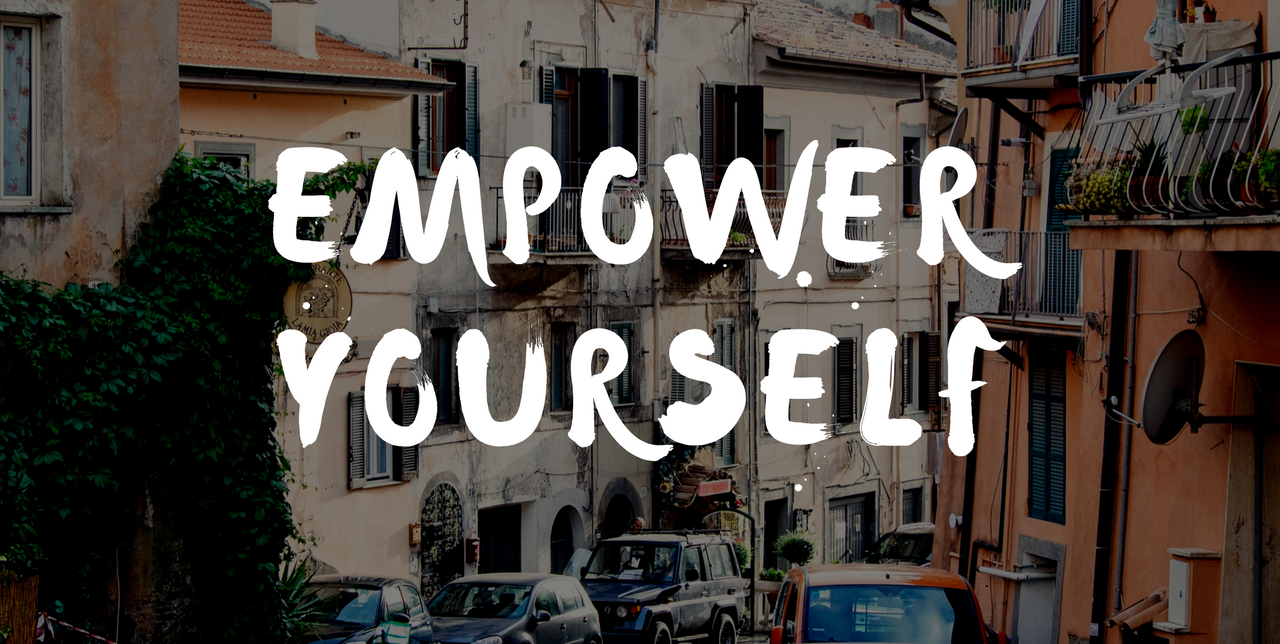 The last time I saw a caring and very given dog owner, was watching the show “Cesar 911.” Until I met Nicole Bennet. I always wonder why my mom didn’t let us have a dog in the house, let’s just say that now I understand why. Being a dog owner is a huge responsibility, reason why I decided to interview Nicole, to learn what it takes to be the greatest of the greatest to your dog.
“I’ve never thought about pets, until I got engaged to my husband. He grew up having dogs, I didn’t” said Nicole.
“When Duke came into our lives, I’ve never thought I would care as much as I do for a dog. My husband and daughter went to go get him, brought him home. He was eight weeks,on the third day I was like he’s my baby” she said.
Duke was her first dog. He’ll be eight in July. She took care of him like a child. She said if you want them to pee outside, eat, or behave you have to spend time with them. 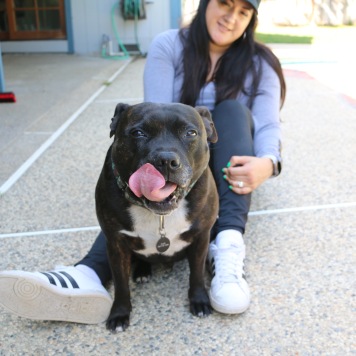 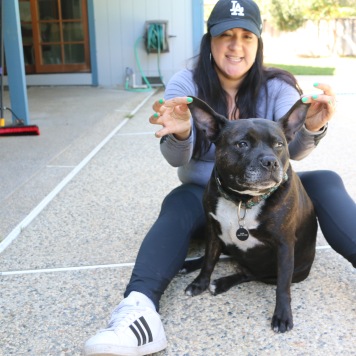 Nicole and Duke.
Dog owners need to have compassion for all animals, not just dogs and to realize that they do have feelings even though they don’t speak.
“A dog owner needs to realize that a dog is not just a pet like a resident dog” she said.
There’s a difference between having it because it’s cute, compared to no this is my dog. She explained the difference between a resident dog and a family dog.
“The dog should eat when you eat, being taken care of just as you would yourself. I consider my dog a family dog. I treat my dog better than my family” she said.
The idea of having a dog sounds lovely, but the responsibility of feeding, walking, and pick up their poop should be considered right from the beginning.
She said, they need to be treated like any regular person. Even though, it can live outside and have a bowl of food, it doesn’t mean that the dog is happy. It needs to be fed, exercise and it has emotions.
“You know, it’ll always be there for you no matter what. I think being a dog owner means to be responsible. Being responsible for the dog when you go away from home, or when you work. It’s like a kid. You must be a good parent, you must be a good dog owner” she said.
“I can walk my dogs every day. If I’m sick and I’m in bed for ten hours, my dogs won’t leave my side. They’ll go do their business but they’ll always come back. They don’t really ask for much, they don’t even speak. They only ask for compassion.” She said.
She did volunteer work when she lived in Southern California, at Riverside animal shelter. She helped because there are animals in shelters being euthanized and treated badly.” if I could do something, better than nothing at all” she said.
Nicole and her husband donate to ASPCA shelter, Pitbull organizations and other rescues. 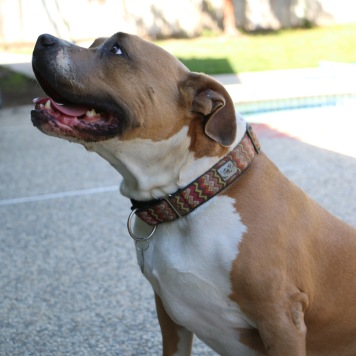 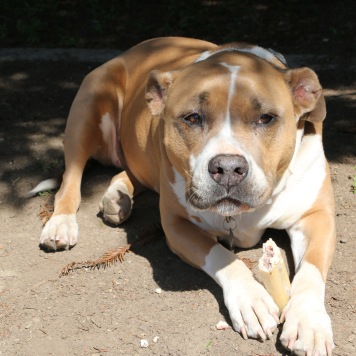 What personally motivated Nicole to help was her second dog, “Duchess” is a Pitbull. “I’ve never realized the discrimination my dog gets, until I actually got one” she said.
“When I got her, I remember my husband got me this book named “Lost dogs” by Jim Gorant. And it’s about the Michael Vick’s fighting dogs case” she said.
She read it in one week and cried through the entire book. She said, she reads a lot but that book put her in whole another emotional level.
After reading it, she realized how bad animals are treated, especially Pit bulls. “I just wanted to make sure I was a responsible dog owner, Pitbull owner” she said.
She says that as a Pitbull owner, just like any other dog is how they’re treated and how they’re raised. “My dogs are Bull Terriers and they’re very compassionate. They won’t work bark at anything, at any people but they know when something is wrong. They’ll just stand by my side. I think it’s truly how you raise them. How to socialize and be cared for” she said.
She said that society mold Pitbull’s background, from irresponsible dog owners.
“You’re talking about big dogs stuck in a yard with no socialization, and never gets out. And when it finally does, it unfortunately does something bad. It’s not the dog’s fault but I consider society, and the owner’s fault, you need to be more responsible” she said.
She read books to train herself. Started with puppy training, then Pitbull training, and then any commands of any dogs.
“Even though my dogs are big, they need to be train just the same as a pound Chihuahua because the dog still need to be socialized, it shouldn’t bark or be aggressive to kids passing by. And when I volunteered they had trainings” she said.
In San Jose, California they have “Rescue Our Pack,” it’s a Pitbull and Chihuahua rescue. “I took Duchess to a few training classes. When we moved to Northern California, in Southern California we don’t have squirrels or at least we wouldn’t really see them. And Duchess wanted to grab these squirrels, I thought she was getting aggressive. I took her to training so she could be around little animals to get better at it. It didn’t work, she still chases squirrels. After watching the movie Up I finally understood the part “Squirrel” and all the dogs would stop and start chasing them” she said.
Her dogs have a steady routine, she takes them to the trail and feeds them. “They play outside too but my dogs are south Cal, they like to lay in the sun. When it rains, they stay inside all day. They don’t do rain” she said.

They do impact her life. They don’t plan vacations unless, she knows her dogs have secured arrangements to be taken care of. Having them, also helps her stay in shape. “Quesadilla for me, bone for you” she said.
“It’s never an option to leave them in the backyard for like 12 hours, with some food. I’m not the type of person. If they don’t get four to five days being walked, I feel guilty” she said.
Nicole also shared her thoughts on animal cruelty. “I wish animal cruelty didn’t happen. I think that animal cruelty punishment should be more severe, their fines and sentenced. Someone who can hurt an animal of any size. It’s only the beginning of something bigger” she said.
When they moved here to northern California, she experienced being discriminated because of her pitbull. They lived at apartments where Pit bulls and Bull Terriers are accepted. She had to pass through some apartments to get to the street to walk her dogs. Walking them with a leash as always.
She walks down and there’s a young couple with their small dog. They were moving out. “It was a crazy dog” she said. She walked by, the dog got out and bitted Duchess her pitbull. The owners didn’t even noticed. When they came out, they started yelling at her, “your f#@… Pitbull is biting my dog” the owner told Nicole.
“Yes, the dog was on Duchess’s mouth but she was just pinning her, stopped her from biting” she said.
Nicole told them to get their dog, to have her pitbull release her. She told Duchess “release,” and she opened her mouth. This small dog wanted to get back at her. The lady kept on yelling at Nicole, “your f@#… Pitbull, that’s why is dangerous..”
“I went crazy, I said my dogs are leashed, they’re trained, they’re sitting right next to me. Your dog got out but I don’t blame your dog I blame you guys. Because you let the dog out” Nicole told the owners.
“That’s what happens, as a responsible owner you need to know, you’re secured all the time. My dogs have been attacked five times, from unleashed dogs, and they were all smaller dogs” Nicole said.
She doesn’t like when owners let their dogs get closer to hers because, she doesn’t know them. As soon as they get close it’s always the bigger dog’s fault, especially Pit bulls.“I get crazy, I protect my babies. I’ll go get them real quick” she said.

Dog breeding was a must talk subject. “That’s a touchy subject” she said.
“I agree on responsible breeding. There’s a difference, clearly there are more shelter dogs than breeders. I would personally go get a shelter dog, but I can hate the people that want a husky because it’s rare to see them. I would say there are responsible breeders, even ours that were responsible. They knew the parents, and the grandparents” she said.
What she’s against, is back yard breeding. “There are people that say, oh look we could make a cute puppy from this breed and this other. Then have the puppies, sell them for two hundred dollars outside the grocery store. That’s not okay. Responsible breeders have applications, sign papers and if something would happen they could take the dogs back at any age” she said.
After facing certain bad experiences, that helped grow as a dog owner. There are definitely great, unforgettable, and lovable memories to keep for a lifetime.
“On Thanksgiving where we used to live, there was a park with two dog parks. And that day was very windy, so my husband says, “oh I’m going to take the dogs out.” I’m cooking, he calls me and says “hey I’m at the park, someone left a Chihuahua toy like 2 pounds.” I said what do you mean?” she said.
“Yeah someone found it, came back and left it here because the shelter was already close” her husband said. “Nicole told him to come back bring the dogs, and she would go get it.
“All of the sudden someone knocks the door, I open and my husband is there with both dogs next to him and a little Chihuahua toy trying to hold him with his neck. He’s trying to hold it while my two dogs are looking at the small dog. And he said, “well I couldn’t just leave it there.”
“I ended up finishing dinner, and we actually kept the dog for like a month” she said. They tried to find the owner, posting on Facebook because it was a cute dog, they named her Chuey.
They wanted to keep her but it didn’t work out. “My best friend’s parents ended up adopting her. That was one of my best dog memories. That was one of my hardest good-bye to a dog that we rescued” Nicole said.
If you are thinking on getting a dog, she would recommend that you look into shelters. “A lot of people usually don’t check out shelters because they want a puppy and think they don’t have it but that’s not true” she said.
Check there first Nicole recommends. “Get a dog that matches your style. There’s nothing wrong with being lazy, then get an elder dog. But if you’re active then get a dog that matches your style. And you’ll have a happy dog. You don’t want to get a Pitbull that has all this energy, you never walk him. And it’s stuck in the back yard. That ain’t right” she said.

VISIT MY IG PAGE TO FOLLOW UP THE AFTER STORIES!: @empower__yourself, and show them love; @iamfamily

CHECK OUT THESE LINKS FOR MORE INFORMATION: BE A RESPONSIBLE DOG OWNER!